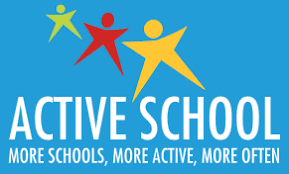 CHECK OUT OUR GALLERY SECTION FOR PHOTOS OF

In addition to PE lessons, pupils take part in many fun activities to stay active. Our school day is regularly revitalized within the classroom with ‘brain break’ activities thanks to the Go Noodle website, the Bizzy Breaks programme and teacher led physical movement breaks. These regular brain breaks boost energy levels fueling the children’s brains for further learning. These breaks are particularly important on rainy days when we can’t get outside and movement breaks are extended on these days.

We have many initiatives to promote activity throughout the day and school year. These include the a Halloween and Easter Scavenger hunt, whole school Christmas fun runs/Ireland’s fittest family inspired activities and céilís during Seachtain na Gaeilge.

During the 2019/2020 school year, we also invested in freshening up our the playground markings. This has benefited our P.E. lessons and has also increased physical activity during break and lunch time. The pupils use the playground markings for their own made up versions of the game ‘Tag’.  These games are called ‘Lines’ and ‘Prisoners’. They also enjoy throwing beanbags at the target board, skipping and shooting hoops using the basketball markings. 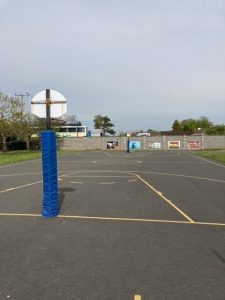 Our playground also has a large grass area with goal posts. This area is well maintained by our Caretaker, Ger and hosts daily soccer matches amongst the senior pupils. In recent weeks, we also invested in new soccer balls. Leather footballs to be used exclusively on the grass area and all-weather balls which can be used on the tar mac on wet and rainy days. 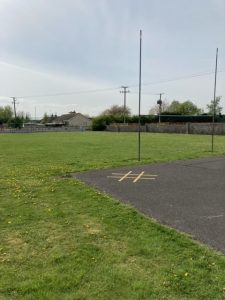 Teachers also incorporate physical activity throughout the curriculum. For example: walking and measuring out the length of a kilometre on the basketball court with a trundle well in Maths, nature walks and Deir O Gradaigh as Gaeilge.

For four weeks from November 8th 2021 to December 3rd 2021, the pupils in the Junior and Senior Class took two movement breaks daily.

The senior class took their movement breaks at 9.50 a.m. and 11.50 p.m. We took inspiration from the Bizzy Break Booklet (file:///G:/My%20Drive/Downloads/21468_Bizzy-Breaks-Booklet%20(1).pdf). We completed activities such as Step sequence, Hand Jive, Mystery Mover and Dance Dice. We completed yoga activities from www.gonoodle.com. We also used Joe wicks’ youtube videos and our basketball court for running and walking. (Ms. Mann)

The Junior room took 2 movement breaks each day at varying times chosen by the teacher. We really enjoyed using our 6 bricks and ribbons to create streamers and used these in creative ways to dance to our favourite songs. We also used Joe Wicks and GoNoodle videos and invented stomping dances to accompany our class rote-learning chants. We discovered Virtual PE fitness runs on youtube and had great fun navigating obstacle courses while pretending to be our favourite characters. (Ms. Dunne) 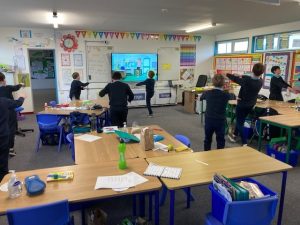 During the February 2022 midterm, our caretaker put up the signs for the Active Walkway around our school grounds.

On the 14th of March, 3rd-6th class (Active School Committee) were introduced to the Active Walkway concept. They drew aerial maps of the school grounds and labelled the Active Walkway signs from 1-14 (and start/end point) during an orienteering activity. After which, they measured the total length of the walkway as a whole class using trundle wheels. They began at the starting point, went to location 1, then 2 etc. until they reached location 14. Ms. Mann then explained that the Walkway starts and finishes at the Starting point at the front door of the school.
The total distance of our Active Walkway is 762 metres.

As part of their introduction to the Active Walkway, the Junior Classroom (Junior Infants- 2nd Class) walked the walkway with their teacher, Ms. Dunne. They enjoyed finding all the  signs and exploring the different colours, numbers, shapes etc. on them.

After the initial introduction, Ms. Mann used the ‘Active Walkway Ideas Booklet’ on the Resources section of the Active School Flag website for cross curricular worksheets during the months of March and April. Ms. Mann also adapted her Walkway map each time the walkway was used by her class. This meant the pupils had to focus on the location of the sign at a given number rather than the number written on the sign. This took a bit of getting used but ensured the Walkway was always a challenge in terms of map reading.

We also used our Active Walkway during Active School week. 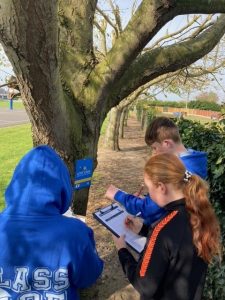 During a class discussion on Tuesday, 15th of February, the pupils in the senior class became familiar with the concept of playground leaders. The pupils were given a choice to become one. 13 out of 14 pupils from 3rd-6th Class became leaders. A rota was drawn up and a list of playground games was created as a whole school activity.

From Thursday, February 16th, Playground leaders occurred once a week at lunch on Thursdays. The playground leaders worked in pairs or in groups of 3. It worked out that each pair/ group was on once every five weeks. Each week, they picked two games from the list of playground games that was compiled by the whole school. A whole school vote took place at break time which allowed the leaders to have P.E. equipment ready for lunch. Teachers on yard gave some assistance initially as the playground leaders came to grips with managing and organizing their peers into games. Playground leaders wore the high vis provided by the Active School Flag initiative. All pupils in Ballyroe Central N.S. had a choice each week whether or not they wanted to take part.

In Senior Classroom, we also linked our procedural writing with the Active Flag Initiative.

Playground Leaders has been one of the most successful parts of our Active School Flag initiative. It has been great for the self-esteem and confidence of Senior Pupils and has linked in very well with our Amber School Flag. 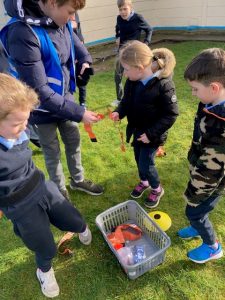 On March 10th 2022, the 3rd-6th class (Active School Committee) started preparation work for the ‘Run around Ireland’. Using Google maps on the school laptops, they found the location of the school and then measured the distance to the nearest kilometre to the various locations listed on the ‘Run around Ireland’ challenge. We then had a whole class discussion about how what we go about the challenge. We decided to start with the locations which were closest to our school (Athy) such as Brownshill Portal Tomb, the National Stud and Donaghmore Workhouse.

On the 14th of March 2022, we started the ‘Run around Ireland’ challenge. During their movement break, the whole ran or walked for 10-15 minutes around the basketball court in our school’s playground. At the end of this time, we nominated 4 pupils who recorded how many laps each pupil completed. These laps were then added up and daily whole school totals were made. During a Maths’ lesson on Length in January 2022, we previously discovered that 12 laps of the basketball court was the same as one kilometre. The senior pupils divided the laps by 12 and rounded to the nearest kilometre to find out how far we ran each day.

We did this everyday for 4 weeks up to April 8th and visited a total of six locations: 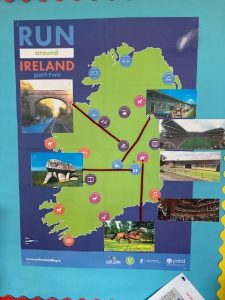